This makes all so dirtied…
Sullied finger one by one enter the hot personal space.
It’s hot here, wet, her breathing abrupt.
Music is loud, it tries to cover this mischief.
A great amount of rock, blasting madly.
This is end of shift in the cafe, there is none left,
doors closed, lights off, just two left in there –
hiding up, behind the counter,
her body bent, his leaning over.

Hot breath on her skin,
his fingers are in.
She gasps for some air,
He shuts her right there.

Kiss is so hot and suffocating,
once pulled back, he goes down, raising skirt more.
His tongue hot against her,
moans leaving her lips,
he really likes to “eat” her,
teasing, looking at how she is.

Full of this lust,
being taught by her,
now it’s payback for all,
desires being released,
dire secrets become known.

Years passed with words of lust exchanged,
His limit reached, he changed.
Now fine man, looking handsome,
able to get any lady,
yet charged towards Her.
The one who spoiled him silly with sin and lust before.

Would he ever turn around? Not ever. He was hooked, intrigued, interested…
Now he is taking it out on her,
passionately, madly,
showing what did he learn now though,
having her sink in badly…

Making her enjoy, he keeps on touches soft,
but grabs hard by the neck,
pulls fer up for another,
hot breathless kiss of death.

Hands turn her body facing counter,
His fingers unzipping fly,
His flesh hot from this blunder,
He wants to make her cry.

His rock hard tip, pressing against her slit,
Pushing it in, so slowly.
He holds her body with tight grip,
Just making sure – it’s not another dream.

Her moans were muffled-
He covered her mouth.
His movements faster, stronger,
He pulls her by the neck –
Bites shoulder of this wreck.

“Now you see what I’ve become?” –
He whispered into ear.
Fucking her madly,
As if last time it were.

When this scene finished,
When he came to an end,
She was left trembling on the floor.
He gave her kiss “Now I will go.”
He said as he dressed up.
“But I’ll be back for more.”

She’s dressing up in darkness,
Devilish smile, eyes sparkling with real madness.
“I knew you won’t be able to get out any more.”
He grasped sense of lustful madness –
He will be coming back for more. 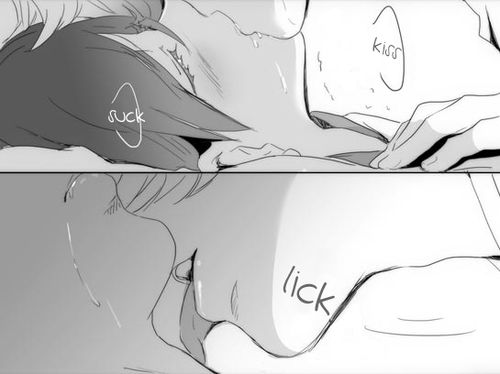